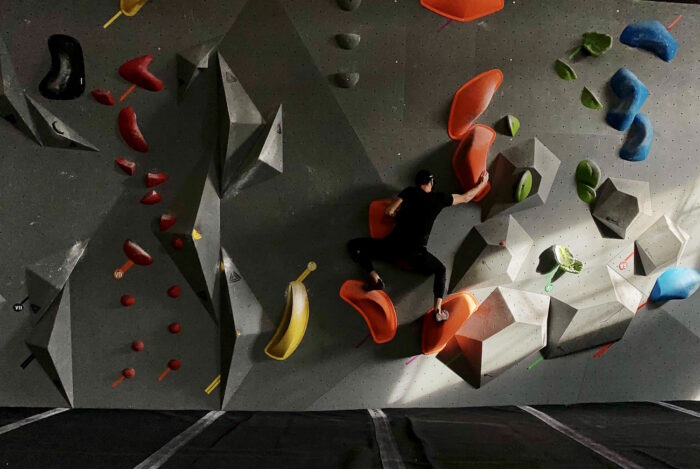 “Are you going to write a list of 30 things you learned in your 30s?” my friend Melanie asked me. We were sitting on the edge of the crash mats at the local bouldering gym, taking a minute to catch our breaths. I had just fallen off the wall, again.

“I don’t know,” I responded, and then reached a chalk-covered hand toward my water bottle. I took a swig. Then exhaled. “Probably not. Should I?”

“Sure,” Melanie said, “People love those sorts of things.”

She was referencing a piece I wrote a decade ago: 20 Things I Learned in my 20s. The article was very successful. Readers love when a writer breaks down difficult life experiences into digestible little lessons: gather around folks, watch me turn my tears into truths! Now, I was approaching another new decade—40 years old—and an opportunity for reflection was approaching.

I looked down at my ankle. Indeed, I had unknowingly ripped off an old scab—a nickel-sized crust of blood that, over the weeks prior, would get very close to healing, but then I would make some type of lazy climbing move and I’d be back at square one with a circular crimson wound.

“I appreciate listicles,” I said to Melanie as I reached for a facial tissue in my backpack, “but that’s not where my mind is these days.” I paused and blotted the wound. “But you pose a good question. I like the idea of reflection, of sharing.”

“Well, I think you should give the people what they want,” Melanie said, laughing as she walked back to the wall.

Oops, I missed the boat

Let’s start with this: turning 40 feels different than turning 30. Certain phases of life—periods of endless possibility, of boundless energy—are falling further and further back in the rear-view mirror. It also seems like collective “markers of success” begin to apply, stuff that is not necessarily applied to those in their 20s or 30s. By this stage of the game, many people own homes or are in long-term relationships or have children or some type of plan for financial stability. Some people are good at achieving these milestones, and some people arrive at 40 having missed the boat on some (or all) of these traditional markers of success.

I am one of those people who missed the boat.

Do I feel like a failure? Well, not really. Over the past 10 years, I had alternative priorities. I made different decisions with my decade. I lived what I would call a “non-normative 30s.” Ten years ago, as I approached my 30th birthday, I resigned from a great job, gave away a rent-controlled apartment, and said goodbye to friends and family—all to chase a lofty goal of travelling for a year. This process of dismantling my life was electrifying and nauseating, and I remember saying to myself, “This is the price of personal evolution.” The year that I spent seeing the world established an overarching theme that would last throughout my 30s: seek expansion not comfort.

The decade I just lived—my 30s—could be used as a case study for those who are debating decisions that will inevitably drift themselves away from “normal.” The truth is that some people don’t live normal lives, and they still do alright.

If you can’t be normal, at least be efficacious

Recently, I listened to Michael Gervais—a high performance psychologist—talk about what it means to live a satisfying life. One key ingredient that he highlighted is a concept called efficaciousness. I paused the interview and let that word roll around.

What would be a more accurate review of the past decade? I was efficacious at many things, but not all things. My sense is that none of us are 100% effective in our lives—because none of us are truly the captains of our own destinies. Try as we might to write a stunning script, life will throw in all sorts of unexpected plot twists. Or sometimes it’s not even plot twists that cause our frustrations, rather the sheer inertia, the persistent weight of life, that keeps us from moving forward.

If you can’t be efficacious, at least let go of shit

If you aren’t feeling terribly efficacious, it could be due to a variety of factors. One reason is that that world is set up for certain people to be more successful—all based on arbitrary factors such as race, gender, class, sexual orientation, ability, nationality, and more. These things are real, and they inevitably influence our agency in each of our worlds. Another reason is that a desired outcome might not be realistic. If my objective is to become an NBA player at the age of 40 with zero training in basketball, I’m not aligning myself with reality. Or perhaps we want too many outcomes.  If I want to learn to sail, speak Spanish fluently, buy a new house, and find a life partner in the next 12 months, I’m also setting myself up for failure. The trick, from my experience, is to identify one thing that you want to make happen and then set realistic goals around that one thing. You can’t do it all—but you can probably do one or two things very well.

And sometimes you might even fail at the thing you focus on.

Take my first book, The Traveller, for example. Before publishing the book, I set a personal goal of selling 10,000 copies. I thought it would transform my career: the sales from the book would open doors, fund future adventures, lead to speaking engagements, and more. The reality was that I didn’t get anywhere close to that sales target. So, was this a failure? Well, it depends on how I measure success. If success is singularly defined by sales, then yes, the project was a failure. Falling so short of my goal might have been reason enough to throw in the towel of my writing career. But the metrics of success are more nuanced. I learned a lot from that book. One of the most important lessons was that the act of creating the book—the writing, the production, the sharing—was valuable enough that the sales numbers became a secondary consideration. I wasn’t efficacious, but there were important lessons learned, specifically around recalibrating expectations and keeping my ego in check.

Another big lesson over the past decade came from a romantic relationship: I loved someone who was unable to welcome my love. (Queue ‘Unloved‘ by Jann Arden.) The long story short is that, for the first time in my life, I found someone with whom I could truly envision building a future together: interdependence, mutual growth, a nuanced modern duo. I was ready for partnership and he didn’t want that. Because I’ve tended to be so deliberate with my endeavours, the scenarios where I wasn’t able to curate a desired result were exceptionally challenging. My expectation of efficaciousness—this recipe of identifying a goal and then following sequential steps to achieve the goal, which applied to such pursuits as running marathons and writing books—was challenged. My supposedly grand “agency” was nowhere to be found. An author who lost his authorship.

What was the result? Well, it involved a lot of disappointment and a lot of suffering.

And this is exactly what I want to highlight: if I move through the world assuming I’m the master of my destiny, not only is this smug and annoying, but it’s a recipe for anguish.

My definition of success has evolved a lot over the past decade. I used to think success involved having a best-selling book and enough money for a condo with modern appliances. Now I view success less as a series of outcomes and more as a modality in which people engage with the world. Successful people act in certain ways. They step into the fire. They enter creative arenas. They start businesses. They learn new skills or new languages. They train for races. They show up to romantic relationships with vulnerability and a removal of ego. They participate wholeheartedly in their own life.

I’m not convinced that the world needs another listicle of life lessons. What we do need, however, is to hear stories of people succeeding, and—more importantly—stories of people failing and getting back up. These are stories that I plan to write more of in the future. In the meantime, I’ll share three lessons that arose from the past decade.

The first lesson is this: you are not actually the sole author of your life story. Despite what the marketing world wants you to believe. Despite the impressive Nike commercials. Despite the flashy motivational speakers. Despite the entire narrative of America. You exist in a social and geographical context that has vast implications regarding who and what you can become. You don’t get to decide everything that happens to you.

The second lesson is this: how you react to what happens to you creates your reality. This is where the authorship piece becomes real once more. Horrible things—job loss, health challenges, grief, heartbreak—are going to happen to you. When they do, perhaps the best thing to do is pause and ask yourself: what is my relationship with this situation? The more you resist it, the more you will suffer. The sooner you accept, modify, or exit a situation, the less you will suffer. The equation is strikingly simple.

I came here to fall

At the bouldering gym, my wound stopped bleeding. I applied a Band-Aid and got back on the wall. Since getting more serious with my climbing over the past few months, I’ve moved from an unrefined beginner to a more observant intermediate. Witnessing my own gradual progress is motivation. Still, on most days I’m just trying to keep up with Melanie, who is able to “see” a wall and gracefully ascend routes, even those with impossibly small holds.

Bouldering is a new type of romance for me—I’m enraptured by it. I like how it challenges muscle groups that I don’t typically activate. I like how, when I’m on the wall, I have to be absolutely present, totally “here” in the moment. And I also enjoy the metaphor bouldering presents: if I’m not losing a bit of skin, if I’m not falling off the wall, I’m not trying hard enough. In other words: I show up to fall.

And that, my friends, is the third lesson.

Read this next: Pride in My Hometown