Pride in My Hometown 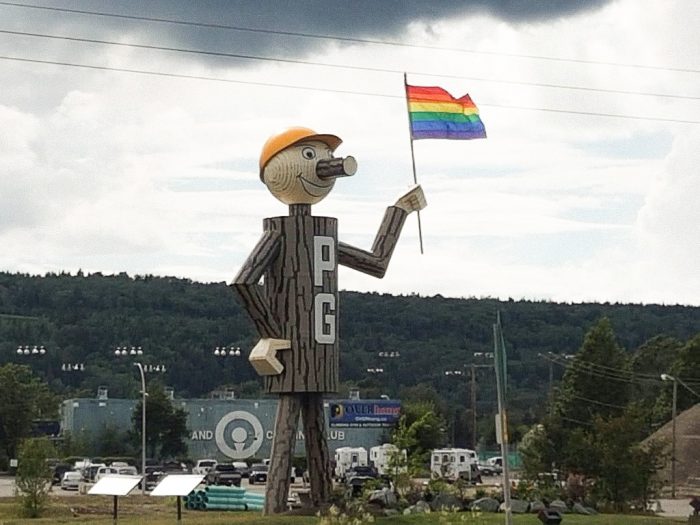 A grey-haired woman in a t-shirt that says “free grandma hugs” is dancing to Lady Gaga’s Born This Way. She looks in my direction, makes eye contact, and walks toward me. I’ve never been one to participate in the free-hug movement because I’m particular with body contact. Don’t be a curmudgeon, I coach myself internally, Just hug her. I step forward with my arms open. She wraps herself around me. Her small body is round and soft.

It’s summertime. I’m in my hometown—the city of Prince George—for a family reunion. My visit happens to coincide with the city’s Pride festivities. In the company of my family, I’ve come downtown for the Pride parade. We’re standing on the sidewalk across the street from the pool where, a few decades previously, I learned how to swim. My dad and stepmom watch and smile. My sister cheers. My niece and nephew dart between floats to collect candy. By most metrics, this is a fun event.

My family doesn’t know it, but I’m fighting the urge to cry. This is my first time attending Pride in my hometown. It feels like a type of homecoming, a type of redemption. But the vibe is relaxed and if I start crying, well, that changes things. Cry later, I tell myself. The soft grandma hug, however, hasn’t made it easier. Under my dark sunglasses, I blink away a couple tears.

I’ve attended Pride parades in other cities, such as Montreal and Toronto, that were more like massive carnivals. The Prince George parade is minuscule in comparison, yet bigger than I expected. There are floats from the local university, the public library, the radio station, even a local coworking space. The town has a new gender clinic: trans teenagers dance in the back of a pickup truck. I’m impressed, gladdened. I got hugged, and it actually felt pretty good.

This is all wildly different from the town I grew up in—a town that I left behind 20 years ago.

I was 17 years old. It was my final semester of high school. The past few years hadn’t been horrible, but high school felt like a bothersome hoop that I was forced to jump through before being allowed to get on with the rest of my life. I arrived at school one morning, walked through the front doors and down the hallway. I stopped suddenly, several feet away from my locker. The word “FAG” was carved onto the door. I ran my fingers over the peeled red paint; it had the bumpy texture of a scar.

My stomach turned. This didn’t feel like random vandalism. This was not a coincidence. Throughout my years in high school, I had been on the receiving end of homophobic slurs, occasional hallway shoulder checks, and gym class harassment. Looking at the word FAG, I felt singled out. I felt detested. At that moment, however, I was not openly gay. I was not even silently gay. I didn’t know what my sexuality was. I was a kid trying to make it through high school, a poster boy for teenage survival mode.

The bell rang. I opened the locker, using the door to conceal the redness that had swept over my face. If this had happened earlier in my teenage years, I probably would have felt even more provoked, more disheartened. But now I was mere weeks away from graduation. I had survived high school. My world was about to open up exponentially.

I exhaled and grabbed my book. Then I closed my locker softly and went to class. Call me a fag, I really don’t care anymore. That’s what I remember thinking.

In many ways, my hometown is an emblematic Canadian city. It’s a working-class town, primarily supported by the forest industry. Citizens enjoy watching hockey and sipping double-doubles at the numerous Tim Horton’s coffee shops. As a teenager I stood out in this environment. I was captain of the volleyball team and active on student council. I made the honour roll and was well-liked by my teachers. Despite success across various domains, however, I was constantly failing in one vitally important area: I did not actively assert my maleness.

Prince George in the 1990s was a cauldron of toxic masculinity. Guys were expected to talk about sports or cars or hunting. We were expected to get shitfaced at pit parties. We were expected to have girlfriends or at least comment on girls’ bodies. Most importantly, we were expected to not show emotion. Indifference (at best) and brutality (at worst) were yardsticks of masculinity, and I did not measure up. When a popular guy at school died tragically in a drinking-and-driving car accident, I did what felt most appropriate: in the middle of math class I wept with the girls. My softness, my tears, even my goofiness—these things worked against me.

I was deemed a faggot by default.

At the end of twelfth grade, I attended my graduation ceremony at the Prince George Civic Centre. I won several awards, including Outstanding Graduate, an accolade presented to the one student who best exemplifies the potential of the graduating class. I was then nominated as the Prince George Youth of the Year. I mention these awards to highlight the discord of my teenage experience: to be celebrated in some realms and treated as less-than-human in others. The awards felt like superficial validation. At the time, I didn’t know how to articulate it, but now I understand: high school had felt like prison and I won Best Prisoner. Nobody wants that award. They just want out.

During the very last week of high school, I arrived to see that my locker had been repainted. Overnight a custodian has erased the word FAG from my world. Again, I looked at the locker, this time blank and smooth. I didn’t feel relief or exoneration. I felt the opposite. For a minute I considered carving the word back onto the locker in bigger, bolder letters—re-vandalizing as an act of reclamation. You tried to bring me down, but it didn’t work. Maybe I am a fag. What difference does it make? But I didn’t. I couldn’t be bothered.

Two days later, I emptied my locker and walked out the high school forever. Then I walked out of my hometown.

After the Pride Parade, I meet up with my friend Hilary to attend the evening’s festivities: a drag show and dance. The events are being held at the Prince George Civic Centre. It’s my first time back in the building since the graduation ceremony 20 years prior. Not much has changed—it still feels like a 1990s conference centre. But I’ve changed. I see it with different eyes now. It feels smaller than I remember, even somewhat charming.

A few hundred people are in the room. They sit on padded chairs at circular conference tables. Before the drag show gets underway, Hilary and I strike up a conversation with a man who is standing alone. He has a small beer belly, a mustache and hearing aids.

“This is fun. It’s nice to be here,” he says motioning around the room. He tells us that he lives in a small town a few hundred kilometres west of Prince George. He smiles as he talks. I sense that he’s eager to connect with people. After a few minutes, he mentions that being open about his sexuality has had mixed results. “My children don’t talk to me anymore.” He shrugs his shoulders. Hilary asks him to sit with us. He does.

The drag show is less like RuPaul’s Drag Race and more like a variety show: some drag queens and some burlesque performers, some singing and some dancing. During the final number, the audience rushes the stage to tuck five-dollar bills into a drag king’s G-string. Then the dance party begins. The setlist is somewhere between a wedding reception and high school dance. For me, this is perfect. I groove to AC/DC’s Thunderstruck—a local anthem—with a woman in her seventies. She wraps a pink boa around my neck and smiles the entire time. I’m smiling, too. In a way, I feel like I’m dancing myself back home.

Brain drain is the emigration of highly trained or intelligent people from a particular geographic area. A similar phenomenon happens with LGBT peoples in rural communities and small towns—“gay drain,” if you will. When queer folks don’t see a future in a community, they do one of two things. If they have the financial or social agency, they leave. If they don’t have money or social connections, they learn to protect themselves, and oftentimes this takes the form of shutting down or tuning out.

But some stay and refuse to wilt. These are the strongest ones.

In Prince George, some LGBT folks have chosen to stay, to build a community. They have refused to fade into the backdrop or be silenced, and they’ve subsequently altered the social fabric of the city, to rewire the city’s collective conscience. They are doctors and mail carriers, grocery store clerks and social workers. They’re refusing to be invisible. They each deserve an award.

Some incredible advancements have been made in LGBT visibility over the past 20 years, but the push towards social justice is certainly not complete. Transfolk continue to experience discrimination and hate. Queer folks of colour are wildly underrepresented in media. Indigenous queers face a complex intersection of race, gender, and colonial trauma. Gay men are still rejected from the most sacred spaces of masculinity (case in point: we don’t have an openly gay NHL player). Injustice is linked together—unless we are all free, none of us is truly free.

So, what is the best way forward? How do we continue to make advancements? The short answer: keep showing up. Go to the big-city Prides if you want. Have fun at the carnival of it all. But more importantly, go to the small-town Prides: listen to people’s stories, dance with people you wouldn’t typically dance with, offer a hug. At any time of year, you can donate dollars to community organizations that support queer youth or trans advocacy or reconciliation. Also, don’t assume anyone’s gender identity or pronouns. Most importantly of all, remind people they are welcome; not despite their difference, but because of it. Your hug—literal or metaphorical—sends an important message. It says, “Honey, it’s okay. You’re safe here now.” This is a message that everyone is entitled to hear.

And now that I’ve heard it, my hometown has never felt more like home.

Read this next: The Art of Wasting Time