Standing with the Excluded 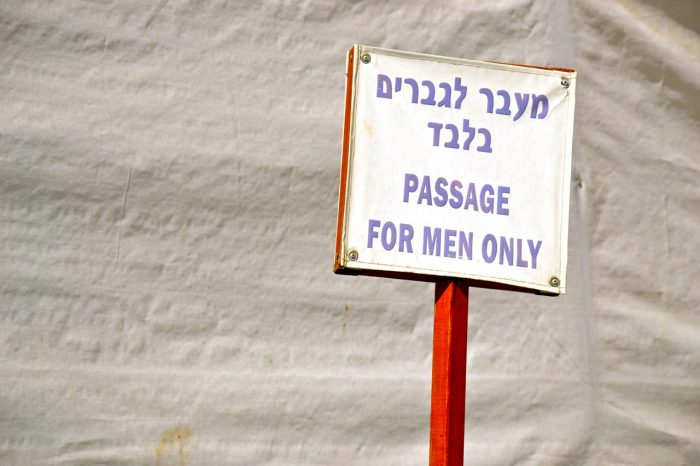 They say that life is all about balance. Am I spending enough time with my family? Should I devote more time to work? Could I be getting more physical exercise? Am I staying on budget? I could go on and on with the scales that we balance. Such is the dance of any ambitious human for equilibrium.

One of the challenges that I navigate in religious settings is trying to find a balance between being a “good traveller” and permitting myself to have subjective beliefs/honest reactions to what I witness. Somehow installed within me is a notion that a good traveller is able to remain diplomatic and nonjudgmental, they greet difference with intrigue and patience and celebration. That is an ideal that I strive to attain, but I am certainly not always that person. I have judgments and opinions and gut reactions.

Today was like that. I tried to be open. But it was tough.

I stood before the Western Wall in Jerusalem and observed the rituals of a religion rich in history. The Western Wall has been a place for Jewish prayer and pilgrimage for centuries. Today I watched men dressed in traditional garb, pulsating as they recited scripture, young boys sitting diligently in desks, absorbing the traditions of Judaism and tourists watching with intrigue at what was unfolding before their eyes. Unequivocally, I was one of the latter.

I observed the holy men for about fifteen minutes, and when I was ready to exit the plaza, I picked up a small information pamphlet that unpacked the meaningfulness of this location. It addressed some questions that were looming in my somewhat uneducated head. What is the significance of The Western Wall? What does the Temple mean to Jews and to non-Jews? Why is the Temple Mount sacred?

However, the question — and subsequent response — that struck me the most was this:

Question: “What is special about being at the Western Wall?”

Answer: “All stand equal in front of the Wall.”

This where I drifted out of “good traveller” mode and into “human being with his own personal politics” mode. I found this proclamation of equality to be odd considering the segregation that I observed — at the Western Wall, there is a boundary that divides male and female access. The immediate question elicited was, “If we’re so equal, why are we separated?” Furthermore, I’d say that two-thirds of access to the Western Wall was devoted to men. And I am not a math whiz, but wouldn’t equality would be expressed (in a physical sense) as a ratio of 1:1. Maybe in this instance men are considered just a little more equal. Sorry gals.

As a response to this, my feminist side was doing a bit of dry heaving.

To many, this segregation is not overly shocking. For myself, it was not a sudden personal revelation that gender inequity existed in religious practice or expression, or in the world in general. In this instance, my distain for dogmatic practice and gender-based inequity trumped my desire to be a nonjudgmental “good traveller.” I have a whole backpack full of heated, judgmental opinions of what I witnessed at the Western Wall.

And as I walked away, I began to think more about what it means to be “divine” or “holy.”

If one wishes to be “holy” or valid in the eyes of the divine, I believe that there are multiple ways of expressing one’s faith. Sure, you can wrap a leather strap around your wrist or fast for a month or wear an orange robe while begging on the streets or consume wine in honour of some sort bizarre blood-sipping ritual of eternal life. But there are plenty of other ways.

The type of divine figure that resonates in my soul does not demand the recitation of scripture or wearing of a certain hat or the separation of men and women. Instead this figure would encourage other types of action: creating a job for the under-employed, teaching a person how to grow vegetables, listening to the stories of an elderly person, eliciting smiles from a sorrowful person. As far as I’m concerned, kindness and compassion are the closest human practices/expressions of divinity. If I want to be divine, I should get off my knees and go plant some vegetables.

And some folks might retort, saying that these aforementioned religious activities are rich with history and meaning, and actually succeed in uniting people. And I wouldn’t necessarily disagree. But if we want to move towards a state of honouring human rights and encouraging universal human access to equity-based conditions, then we will have to retire some of our old practices, or at least reform them to a point where they might not be recognizable.

For the record, I’m not opposed to religion (or religious practice) — Judaism and Christianity and Islam and other religions provide a moral compass for millions of people across the planet. But I hesitate to fully celebrate organized belief systems until there are major transformations that put to rest the centuries of perpetuated inequalities.

I look forward to the day when I can give the “thumbs up” to religion. This day will occur when the Vatican celebrates the ordination of the first female Pope, when Islamic leaders unanimously agree that LGBT peoples are an expression of Allah’s love for diversity, when Rabbis declare every single human being as a “chosen one.” On this day I will celebrate the divinity of religious practice.

Until then, I shall stand with the excluded.

And that actually helps me feel more balanced.