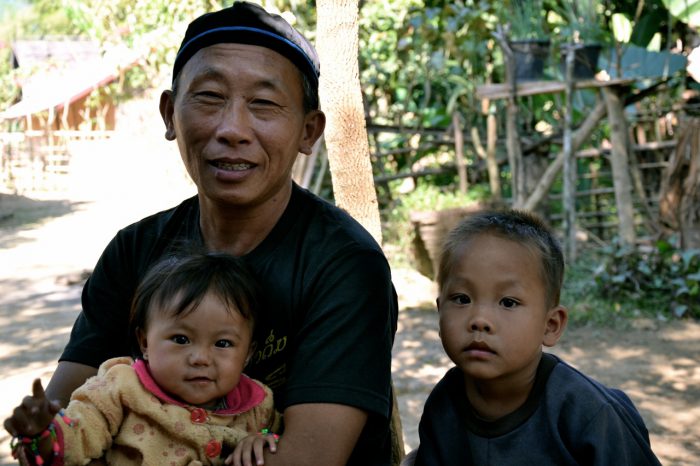 It’s been another stellar week in the Southeast Asian nation of Laos. I am constantly impressed by the delicious cuisine and the friendliness in my interactions. And this week, I had the opportunity to see more of the dramatic Laotian countryside.

After ten days in Luang Prabang, I was ready to experience more of this nation. I had bumped into a friendly Australian woman named Devarni at the Luang Prabang Wine Bar (my chosen drinking hole) and she gushed about the wonders of a small town in the north called Nong Khiaw — dramatic mountains, a lazily flowing river and friendly people.

So on Tuesday morning I tucked myself into the back corner of a twelve-passenger van and enjoyed/tolerated a three-hour bumpy ride northward to the recommended village in the mountains.

I stayed for five nights in a little bungalow that had a hammock and a sliver view of the river. I ate at nearly every restaurant in town, sampling local specialties such as laap (stew) and lao lao (a type of rice whiskey). I explored a cave and climbed a mountain. But perhaps the highlight for me was a one-day trek to a remote village where I got to witness, first hand, what life is like in rural Laos.

Many readers have inquired into Laos culture, and to this point I’ve struggled to respond with accurate statements. After having visited for only two weeks, it’s difficult to reach any hard conclusions on a culture.

But travellers are often fielded questions about culture and people and other complex entities. And many of us like to share our experiences. I love to share mine.

But we have to be careful with what we say.

On my mind this week was the actual meaning of sentiments that I hear frequently from other travellers. And I’ve been reflecting upon the best way to communicate experiences. I think HOW we talk about things is equally as important as the content of what we are sharing. As a reader you may or may not have noticed that I’m a big fan of using provisional language when talking about my experiences and beliefs. I think this approach makes my statements more malleable to interpretation and encourages people to form their own thoughts.

Perhaps an example would be most helpful at this moment. Let us compare two phrases that we might hear from a recent visitor to Laos. The sentences basically communicate the same ideas:

“The Laos people are super sweet and everybody has a mobile phone!”

“In my experience, the Laos people that I met were very kind to me. And I don’t know what it’s like in other villages, but in Luang Prabang it seemed like most people had mobile phones.”

The content of the messages are essentially the same (nice people & lots of mobile phones), but the delivery is much different. I much prefer being in conversations where the second style is used. I think that how we communicate our messages is so vital to interpretation and the depth of interaction with our listeners.

As mentioned, this week I was dissecting the actual meaning of sentiments that I hear frequently from other travellers. This was catalyzed by my visit to the rural Laos village where I witnessed a certain amount of scarcity, but also the friendliness of children. Essentially, there was poverty and happiness together.

Frequently I hear a problematic statement from travellers in response to a rural village or lower socioeconomic region of a developing nation. Perhaps you have also heard this proclamation before?

The statement is usually shared after an inquiry into the people of any given nation.

Question: “How did you find the people when you visited that village in India?”

This type of response triggers me. If I take a diplomatic approach, and interpret “They’re poor, but they’re happy” in the most positive way possible, the subtext communicates a theory that I personally agree with: one does not need money for contentedness. And, if I stretch the analysis even further, that the western emphasis of financial acquisition is not necessarily a humanistic value. I agree with this. In her famous song, Coat of Many Colors, American country icon Dolly Parton communicates the same idea of not equating personal economics with personal levels of success: “Although we had no money, I was rich as I could be.” I think we all want to believe in this sentiment.

And sure, money can’t buy me love (or happiness). But money works wonders to sidestep suffering. Let us not romanticize poverty.

It’s problematic for any foreign traveller to state, “They’re poor, but they’re happy” and subsequently administer a conclusion on the emotional state of a body of people. As a tourist or traveller, are we actually able to make a sweeping generalization about the level of contentedness of a community or a nation after only visiting for an hour, a week or even a month? Absolutely not. How do we know that the folks in the village are smiling because it’s part of a cultural value to “save face” or display pride? Or because they know that smiling faces are an important component in bringing tourist dollars?

To reach any sort of conclusion on the level of happiness of a community or nation, one would need months and months of widespread social investigation, and even then would need to examine the biases of their research methodology. Obtaining the emotional psyche of a nation is a complex, if not impossible, process.

Secondly, as a listener, how do I know that the statement is not serving to alleviate one’s guilt of his own privilege? Is it not simpler to quickly label a group of people as “happy” than to actually address economic inequities that exist in “poorer” communities? Is it not easier for a westerner to relieve any responsibility to his or her fellow citizens by labeling them happy and gleefully skipping back to a cushy life of big screen TVs, low-cost-foreign-produced box stores and affordable maid-service (from immigrants who incidentally have immigrated from nations where they had little access to healthcare and education, but were really, really “happy”). Think about the liberation from accountability! My life is wonderfully blissful if I can believe that everybody else is happy.

If only it were that simple.

So, how do we fairly communicate that which we witness? If we actually go to a rural village and have a positive experience because we were surrounded by people who had no money but were still smiling, what do we say? I suppose it starts with choosing our words very carefully.

Here are some examples of how to reword the “They’re poor, but they’re happy” paradigm while still communicating the essence of an experience:

“I don’t know what it’s like in all Brazilian villages, but when I was in the northern regions, I found the people to be exceedingly friendly.”

“After visiting several hospitals in Zimbabwe, I was concerned by the limited access to modern healthcare options. But I also noticed that there was a strong feel of community that perhaps was a medicine in its own regard.”

“I laughed a lot when I visited a remote Russian village. It’s amazing how we could have fun with just a football and a bit of positive energy.”

As mentioned, I think it is helpful to use provisional or tentative language when describing statements that summarize large concepts or groups of people. It also could be beneficial to “own” the statements that I make: “In my experience…” or “From what I saw…”

When we take ownership over a statement, nobody can dismantle or argue what we are sharing. This hopefully leads to conversations that evade defensiveness or large-sweeping, problematic generalizations. And, if we’re lucky, helps to bring people closer together.

And, as a traveller, that’s just what I aim to do.