Failure in the Era of Flawlessness 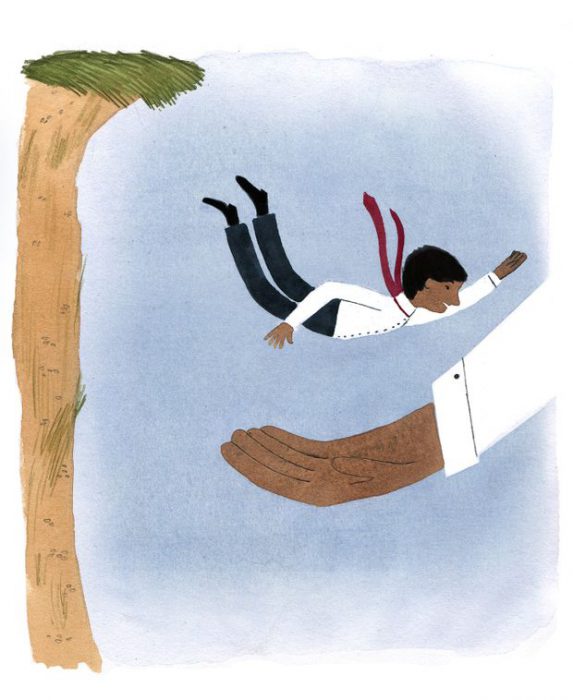 “It’s times like these,” Teresa said, “when we need to take ourselves less seriously.”

Her face had the expression that a parent might use with a child who had dropped his lollipop on the sidewalk: empathy mixed with buck-up-kiddo. This was a few months ago. I was dejected and over-analytical about the slow demise of a romantic relationship. Over brunch omelets, I related these measly woes. Teresa—a middle-aged friend with an honours degree from the School of Hard Knocks—gazed at me over a fork full of eggs.

“Dude, you need to take an improv class.”

I smiled politely. This was not the advice I needed, thank you very much. I wanted to hear what everyone with a broken heart wants to hear: you’re loveable, you’re not a failure. Instead she suggested that I engage in role play activities with a bunch of unskilled strangers.

A few days later, through the smog of self-pity, Teresa’s advice resurfaced. The truth was that I was looking for an extracurricular activity, something that would get me out of my head and even get me laughing. A quick online search revealed a local improv studio located a short bike ride from my apartment. An introductory class, which consisted of four consecutive Tuesday evenings, started in a few days.

What did I have to lose?

Conventional wisdom around the concept of “failure” is paradoxical. In one camp we have a type of neo-pop-wisdom coming from Silicon Valley that extols failure as a sign of success. Fail fast, fail often, the slogan goes. Cited by many entrepreneurs, it’s the golden ingredient for startup success. Plus, it makes the perfect hook in a TED Talk narrative: Look how bad I failed—and look at me now!

In the other camp we have a greater cultural context that is embodied by RuPaul’s iconic catchphrase: Don’t fuck it up. The reality is that we’re in competition with each other over resources. We have to pay bills at the end of the month, and failure could result in dire consequences. It’s fine to fail when one has a social safety net that won’t leave a person jobless or homeless. Failure, however, might be less tantalizing when you’re disabled, or queer, or a veteran, or a person of colour.

Added to this mix is the constant illusion of “success” displayed across advertising and social media. Fashion brands promote beautiful (read: non-failing) people. Instagram shows friends living their best lives. We’re surrounded with highlight reels. The ugly parts are filtered, air brushed, pushed away into dark recesses where we don’t publicly witness them. Hashtag flawless! As a result, when we feel like we are failing, oftentimes we feel like we are alone. Compounded failure.

Between failure as blessing and failure as devastation, it’s tough to know how to frame it.

“We’re all here to fail.” These were the first words out of Instructor Kyla’s mouth—directed to a circle of fifteen expressionless students. Instructor Kyla looked like Kristen Wiig, and when she spoke, she tilted her head and gazed into space. “But this is the safest place to fail.”

We were invited to introduce ourselves and give our reasons for registering for an improv class.

“I’m Liu Wei.” A young man in his twenties spoke softly. “I’m studying business and I want to be stronger in English.”

My palms grew sweatier as my turn grew nearer.

The blond woman beside me spoke next. “Hello, I’m Sarah. I’m an actress and I want to bring depth to my work.”

Now it was my turn. What exactly would I disclose to these strangers? Hi, I’m Daniel and I fell in love with someone who didn’t love me back. If I spontaneously burst into tears, please wrap me in a quilt and play a selection of Alanis Morissette songs.

“I’m Daniel. I’m a writer.” I paused. “I spend a lot of time working alone.” I paused again. “I suppose I’m looking for an opportunity to get more into the moment—to not edit myself.”

Ironically, this was an edited version of my motivation. What I didn’t want, however, was to overwhelm my classmates.

“Great, we’ll get into our first exercise,” Instructor Kyla said when we circled back to her. “But first I want to tell you the first rule of improv.”

“The first rule of improv is to agree.” Instructor Kyla lifted her eyebrows as she pronounced the word “agree.” This instruction was the opposite of critical thinking, and I attempted to wipe my face of suspicion.

“When you’re working through a scene,” she continued, “the best thing you can do is accept what your partner has said, and then attempt to build off it. Now, let’s start our first activity.”

She instructed us to clear the chairs, and then to walk around the room.

“Walk small. Hide yourself. Don’t look anyone in the eyes.”

From an outsider’s perspective, we looked like a support group for failed thespians.

“Now, walk bigger. Pretend that you have confidence! Take up space!”

Over the next hour, we moved through a variety of introductory activities — everything achievable. For our final task, Instructor Kyla invited half the class onto a one-foot tall stage. I volunteered. Her instruction was for one student to start an action (for example, mowing the lawn) and give it an emotion (for example, elation), and then for a second person to enter the scene, emulating the same action but introducing a different emotion.

An effervescent woman stepped forward, sat down with her legs crossed and began to meditate. She smeared her face with frustration. I decided to join the scene, sitting next to her, expressing sadness. Instructor Kyla queued us to start speaking. We exchanged a few lines of unremarkable unscripted dialogue. Then I said exactly what popped into my head, “It’s weird that we’re talking in meditation class, no?”

“Hold up,” Instructor Kyla intervened. I opened my eyes and saw that she was smiling encouragingly. “Do you see how that’s a block? How you’re resisting what’s happening in the scene?”

Essentially, I had critiqued the scene instead of adding to it.

“Gotcha,” I replied. Then I closed my eyes, went back into my meditating character, and tried again. “These conversational meditation classes are really wonderful, hey?”

I had failed, but then kept going, and then—on some level—succeeded. And at that moment something clicked.

I finished the four sessions of introductory improv, and immediately registered for the second level. I wouldn’t say I was the next Tina Fey, but I was having fun. Sometimes, I made my classmates laugh. Sometimes, I was less remarkable. But I kept showing up, and during those two hours I didn’t think about my work deadlines, or my grocery lists, or the sadness in my chest. Gradually, my emotional wounds calcified, perhaps because the classes kept reemphasizing an important lesson: don’t deny what is—agree with it, and then move forward.

So, how do we frame failure? My answer is this: let’s not. Let’s focus on what happens after we fail. Mistakes are going to happen. We will declare bankruptcy. We will bomb the final exam. We will get our hearts broken. But maybe we can start new businesses. Retake the course. Mop up our hearts and go on dates again. From what I’ve witnessed, the most interesting success stories are less about the point of failure and more about the acceptance of a damaged dream, and ultimately what a person does with the broken pieces. Perhaps the only true failure is the inability to keep moving forward.

If that’s the case, could every single breath we take be a minor success?

This article first appeared in The Globe and Mail