Memoirs of a Collage Junkie 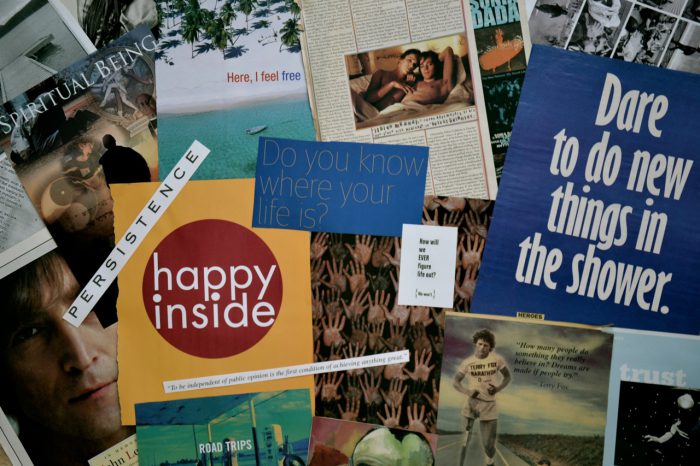 “You know, all those boxes under the stairs are yours,” Dad reminded me last week, before he departed for vacation and left me in charge of his house. “It’s all there if you want to take a look.”

I wasn’t sure if the statement was a gentle encouragement to whimsically explore the artifacts of my childhood or a delicate hint to get the pile of sentimental garbage out of his house. Maybe a little of both.

“I know,” I replied dismissively.

“Okay,” he shrugged his shoulders, “I’m just letting you know.”

I had zero intention of rooting through the paraphernalia from my youth. The boxes, as far as I could remember, contained elementary school art projects, high school essays and university textbooks. Someday, when I have a permanent home, I will be happy to take responsibility for the boxes. But for now, I figured it was best to keep things tucked away.

But yesterday I was struck with a wave of restlessness, and my Dad’s suggestion proved to be the perfect procrastination activity. I went downstairs, opened the little stairwell door, pulled the stringed light bulb and crawled inside to see what the past had in store.

It would be inaccurate to describe the experience of rooting through a box of my childhood memorabilia as “nostalgic.” Nostalgia is a yearning for time gone by, a certain sentimentality for the good old days. Despite relatively happy memories of my childhood, I have no desire to go back. Revisiting my long-lost treasures sparked a sensation best described as the intersection of mild indifference and general relief. In regards to childhood, I succeeded to remain alive and life is now better.

I suppose we all have our personal reasons why reflecting back over the years might not be the most appealing of activities. For instance, what if we come across concrete evidence of a childhood riddled with unspectacularness?

As I went deeper into the boxes, my lack of prodigy became abundantly clear. Some of the material in the boxes was cute and culturally charming, for example the pink clay imprint of my two-year-old hand or the paper cut-out of Bonhomme. But much of the material was cringe-inducing, such as the duo-tang of poetry from Grade 7.  At first I wondered if the anthology of verses written by a twelve-year-old me would contain something that I could point to and confidently say, “Herein lies the early evidence of a master wordsmith!” But no, there was nothing remarkable. The poems were lovable in the way that a parent loves an ugly child, and I felt a surge of remorse for subjecting my seventh grade teacher to stale haikus and lifeless limericks. The boxes were filled with stuff that was, at best, precious and sentimental. And, at worst, it was regurgitative, demonstrating a generous amount of creative mediocrity.

And so, slightly defeated, I began repacking the boxes. If I felt ambitious in the coming days, I figured I might pull them out again, not for reminiscing but as an attempt to actually clear space for my Dad. Really, is there any point in holding onto my safety goggles from high school chemistry class? How many poorly drawn crayon horses are enough? And what’s that Jewel album still doing there?

But as I was about to place the lid back over the final box of memories, I noticed something that I had overlooked, and immediately picked it up: a simple manila folder full of magazine clippings. The fact that it still existed provoked a small sigh.

When I was in my late teens and early twenties I used to seek out printed material, anything that might contain photographs of nature, portraits of musicians, compelling words or interesting patterns. Alone in my room I would rake through pages and cut out whatever inspired me, often tearing through pages of Rolling Stone magazine, university newspapers and travel brochures. I vividly remember the ritual — the crinkle of glossy paper, the crunch of scissors, the matching of quotes with photographs — as I prowled for images and words that reflected my personal identity.

After I had enough material, I would use blue sticky tack to cover my walls with a hodgepodge of words and images, curating a visual representation of the reality I hoped to create. Eventually I’d step back from the collage and say, “Yes. That’s it. That’s what I want to become.”

Yet, at some point, all of these images and words got taken down. They were placed in a folder, which was put in a box, which was tucked into a dark space under the stairs of a house that I don’t actually live in, destined for a future alongside Bonhomme and bad poems.

That small sigh elicited when I opened the folder didn’t come from nostalgia or regret or despair. It came from relief, from the realization that stuff gets tucked away when it no longer serves a purpose. At some point I simply stopped making these dream collages because I no longer needed to craft a reality external from the one I was living.

Up next: The World is Tragically Stocked With Interesting People